Vergara’s work came to my attention while reading Mark Binelli’s 2012 book Detroit City is the Place to Be, which I plan to review here soon (in short: it’s excellent). Binelli treats the topic of ruin pornography while discussing the migration of artists, journalists, and everyday bohemians to depression-struck Detroit, where they derive inspiration and material from the ruins of the city. Hanging around Cleveland, I’m already familiar with the ruin porn trend. And during my travels around the state, I have found myself taking my own pictures of decline, like this series of photographs, three from a half-demolished acme plant in Toledo and another two from downtown Youngstown. When facing sights such as these, embodying an utterly oxymoronic grand destitution, it is hard to resist the compulsion to capture that contradiction. One crumbling building can speak simultaneously to past, present, and future. 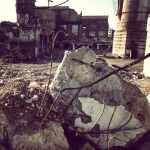 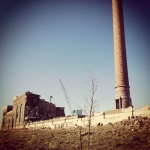 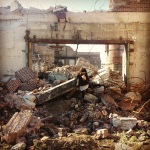 Me, walking through the rubble

Terracota facade of the closed Paramount Theater, which is being restored and the building reopened by community and government efforts.

“Photojournalists, on the other hand, were almost universally considered creeps pandering to a sticky-fingered Internet slide-show demographic. To some extent the critique had been just: as with stories about misbehaving teenage starlets, editorial love of Detroit came with obvious exploitative commercial reward: a link of a titillating shot of Detroit’s architectural dishabille could always be counted to rise to the top of your website’s ‘most emailed’ lists, which was, of course, the bottom line.

“At the same time, it wasn’t fair to automatically condemn all such photography. As often as portraits of the city’s ruins might be distorted and sensationalized, blanket condemnations felt equally disingenuous. Ignoring the blight altogether would have been reportorial malpractice akin to writing a travel piece about Malibu and failing to mention the Pacific Ocean.”